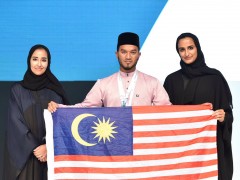 IIUM World Debate and Oratory Centre (IWON) would like to congratulate our Arabic debaters for their achievements at the 5th International Universities Arabic Debating Championship 2019, organised by Qatar Debate, subsidiary of Qatar Foundation. The tournament took place from 16th until 20th March 2019 at Doha Convention Centre, Qatar. For this year’s edition, the tournament received participation of universities from 52 countries which competed into two categories, native speaker (open) and non-native speaker.

IIUM team achieved an amazing feat at this year’s tournament by ranking first after winning all five preliminary rounds in the native speaker category. The team managed to reach the quarter final stage of the tournament. One of our debaters, Br. Abdul Rahim Bin Ellias from KIRKHS received the third Best Overall Speaker Award for the Open category.

Anwar: Education must have soul and excellence

Islamic studies in schools to be reviewed to emphasise universal values and humanity, says Anwar