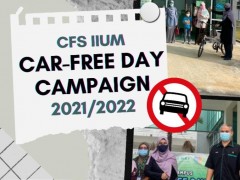 The mini exhibition is open to all divisions in IIUM. The CFS has set up exhibition booth of CFS Flagship Programme, Low Carbon & Green Campus. This flagship focuses on reducing vehicles movement in the campus. Coordinated by Department of Legal Studies, under the flagship, campaign of CFS IIUM Car-Free Day is launched to encourage motorists to give up their cars for a day. This campaign will be conducted once a month to preserve the earth for a sustainable future. Simultaneously, it is also to inculcate healthy walking and cycling culture at the campus similar to other developed countries, Japan for instance.