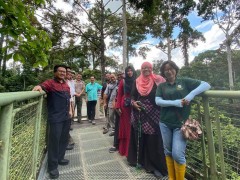 SANDAKAN: Collaboration between research groups globally is increasing and it is
important to acquire and store cell lines, both frozen and in cell cultures, for species that are endangered.

The agreement between IIUM and Bora was “Production of Human Capital at Master Level for the Application of Advanced Reproductive Technology to Endangered Species in Sabah”.

Under this project, two Master’s students would be working on aspects of the culture of living cells from the last three Sumatran rhinos in Malaysia.

The students are supervised by Associate Prof Dr Muhammad Lokman Md Isa of IIUM. With this work, the genomes of Tam, Puntung and Iman are alive in Malaysia, ready for the steady advances in cell biology which are already making sperm, egg cells and embryos from skin and organ tissues.

The origin of the Centre is a programme to apply advanced reproductive technology as a means to help prevent the extinction of the Sumatran rhinoceros and other endangered wildlife species.

The programme is funded by the Ministry of Water, Land and Natural Resources Malaysia, through a grant to Sabah Wildlife Department.

Because it is located on this campus, the Faculty of Sustainable Agriculture is also set to benefit from this centre, in particular in the breeding and development of better livestock and for the conservation of genetic materials from superior quality breeds.

As of January 2020, the Centre has a “frozen zoo” of semen from 52 individuals of 14 species, including Sumatran rhino, Sunda pangolin, Bornean sun bear and Sunda clouded leopard.

In 2020, a start will be made on harvesting egg cells from wildlife species, so that in vitro embryos can be made and stored at a temperature of minus 196°C in liquid nitrogen.

This programme is in line with the National Policy on Biological Diversity 2016-2025.

According Prof Dr Abdul Hamid, in recent years, it has become apparent that the reasons most commonly stated for the decline of wildlife species (poaching, habitat loss and habitat fragmentation) are only part of the story.

“These issues are certainly fundamental, but a reality that can be changed only to a limited extent. Protected areas tend to be too small to sustain viable populations of the large wildlife species in the long term.

“Insufficient births becomes a major problem to be addressed, rather than excessive mortality (poaching).

“Once the overall numbers of a species become very small, issues of inbreeding and reproductive tract pathology drive numbers even lower. Genetic diversity can become dangerously low,” he said.

One approach is to keep living genomes in liquid nitrogen. Transfer of thawed frozen embryos into surrogate mothers is done routinely in humans, horses and livestock, so it can be done with any mammal species,including endangered wildlife.