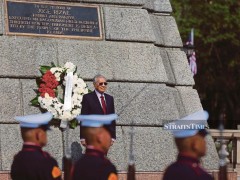 Filipinos and the Malay World

By Datuk Dr A Murad Merican

THE discovery of a book in London in 1888 by Jose Rizal reconnected the Malays in the Philippines to the Malay world. It was titled, Sucesos de las Islas Filipinas (Historical Events of the Philippine Islands), written by Antonio de Morga, a lawyer and official in the Philippines in the 17th century, and published in Mexico in 1609.

In the book, de Morga gave an idea of the connection between the people of Luzon and nearby islands to the rest of the Malay Archipelago. Based on the book, Rizal and his contemporaries then presented to their countrymen a clearer picture of how Malay the Filipinos were beyond the mere and trivial European categorisation of Filipinos as Malay.

The recently concluded two-day deliberations of the 6th International Conference on Culture and History, themed the “Colonial Period in the Malay Archipelago: Civilisational Issues”, was jointly organised by the Institute of Islamic Thought and Civilisation (ISTAC-IIUM) and the Malaysian Historical Society. It saw two papers (out of 15) resonating on the struggle of the Filipinos to be accepted as part of the Malay world.

Both papers made a plea to be part of the historical space called “Dunia Melayu” (or the Malay world) to cite Ian Christopher B. Alfonso, of the National Historical Commission of the Philippines. His paper was titled “Manila 50 Years After Magellan”.

Santiago spoke on the Malayness of the Filipinos and the “Hispanised Malay”, delving on the Filipino seeking an identity, like the Ilustrados or educated Filipinos, enlightened by liberalism in the 19th century.

While searching for their roots, they discovered their historical and racial ties with the rest of the region and began to consider themselves as belonging to the Malay race. The issue of their detached weltanschauung (world view) was raised as a result of Hispanisation and Christianisation, the legacies of the Spanish colonial order and further American colonisation complicate the matrix of Filipino identity.

Santiago reminded that until the 16th century, people from the Philippines were actively involved in the Malay world. The arrival of the Spaniards and later the Americans altered the “predictable course of its history”, and detached the people of the Philippine islands from the rest of the Malay Archipelago.

Manila was part of the Malay Archipelago. The capital of the Philippines since 1571, or 50 years after the episode of the Magellan-Elcano expedition, and we would add, the circumnavigation of Panglima Awang@Enrique de Malacca, Manila had close connections with Brunei, then a vast kingdom in Borneo.

The Spaniards recorded how connected the Manila royalty was with the royalty of the Brunei Sultanate, as well as the continuous sending of Muslim preachers to Manila by the sultanate of Aceh and the Ottoman Empire.

According to Alfonso in his Manila paper, the Spaniards colonised that part of the Malay Archipelago and introduced a completely new order to its inhabitants that was European and Christian and “even taking an extra leap to shut down Borneo, Melaka and Aceh from influencing the natives”.

This Spanish Dunia Melayu was called the Philippines, where its inhabitants were held as hostages, virtually cut off from the Malay world. Although the Spaniards had accidentally reached the Philippines in 1521 on their way to the Moluccas, it was only in 1565 when they began claiming islands in the Malay world, beginning with what were then known to the Spanish world — the unIslamised Visayas.

Alfonso’s account informs us of the Spaniards progress when they were attempting to reach China and Japan. They learned of the farthest recorded Islamised place in the Malay Archipelago. That place is Luzon. The term “Moro”, then derogatory, was first ascribed by the Spaniards in Asia to the people of Luzon island.

After securing the island, the Spaniards moved southwards, to Brunei, Mindanao and Maluku. Mindanao was annexed to the Spanish world, only to be welcomed with formidable opposition by Sultan Kudarat of Cotabato and the generations of Muslims there until the end of Spanish rule. Maluku was abandoned by the Spaniards in 1663 to be conquered by the Dutch.

After the Spanish conquest of Manila in 1571, Luzon disappeared from the discourse of Islam in the Malay archipelago.

Alfonso took a swipe at Malaysian and Indonesian historians for neglecting “what happened to the Spanish Dunia Melayu or the Philippines from 1521 to 1571”.

Only a handful were written or mentioned, “or even not at all, by Indonesian and Malaysian historians about the politics and history of what we call the Philippines at that time. The Filipinos as Malays do not seem to be in the consciousness of the Malays in the rest of the Archipelago”.

Indeed, it was Malays in the Philippines who were the earliest to resist and be liberated from the Europeans, not the Japanese who marked their superiority when they defeated the Russians in 1905. They could have inspired the Japanese instead.

The bravery of Lapulapu, who defeated the Spaniards in the Visayan island of Mactan, resulting in the death of Magellan in 1521 earlier, inspired a consciousness to the nation.

The declaration of independence of the Philippines on June 12, 1898 evoked the memory of the victory of Mactan, as if taking pride that the Spanish colony in the Malay Archipelago, named the Philippines, learned to be free and introduced in Asia the then wave of nationalism.

The death of Magellan was a reminder to the Filipinos that their war against Spain and the United States was also a war on behalf of the oppressed Malays, battered by centuries of colonisation.

What has been resonated is the struggle of the Filipinos to reintegrate “ourselves as part of the Malay world”.