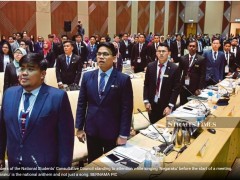 How did we come to this?

IT has often been said that race and religion are the two “biggest” factors behind polarisation in Malaysia.

Perhaps it is true to some extent. Yet it cannot be generalised because there have been many instances and situations ‎that have made us proud to be counted as Malaysians.

The last general election was one such time as most would recall, despite many expecting the worst outcome. What is more when Malaysia holds the record for having the world’s oldest prime minister. And a comeback “kid” at that.

In other instances, some research showed that in rural communities, notably the kampung, the situation is far better than in cities, due to the more cordial lifestyle and attitude.

When it comes to sports and cultural events, or when disaster strikes, Malaysia is often united to present her best, like duck to water. There are many others that go beyond the superficialities of “rumah terbuka” or some specially staged events to gain in popularity.

In other words, the said polarisation is shaped more by the hostile and ignorant attitudes of some Malaysians.

Not too long ago, there were times when racial jokes were considered benign even at a tender age. My school and university days were some of those. Ironically, it brought us closer inter-racially because the laughter that resulted required a very high level of trust and confidence to begin with. Without these, the consequences would have been much like what it is today — tense, rude and intimidating. And worsening when race and religion are turned into a convenient target of hatred for some unexplained reasons.

Lest we forget, the fact remains that even in the most developed and best of democracies, racism and religious supremacy exist. International sporting events are not spared either. So what is new?

In the case of Malaysia of late, the attitudes are more convoluted because there is virtually no common identity that binds them. Unlike in cases‎ cited above where trust exists, the contrast is made complicated because people can no longer express freely and openly in a language that everyone can identify with and understand.

This then gives rise to second and suspicious guessing game, deepening the mistrust. Let us take the national anthem, Negaraku, as an example. How many Malaysians share the same notion of what the word means so as to put us comfortably on the same page? What about “tanah tumpahnya darahku” that follows? Is it merely the “land where I spilled my blood” — literally rendered? Or much deeper than that? How then does it actually shape our attitude beyond the confines of our own race and religion?

Consequently, what is intended by “rahmat bahagia, tuhan kurniakan”? What is “rahmat” when it is linked to “tuhan” (the first article of Rukun Negara)? What level of “kurnia” binds Malaysians further? To adequately respond to most of the points raised, all the related nuances must be amply and comfortably felt within the context of Negaraku to enable one to live by it.

Remember that Negaraku is the national anthem. Not just a song‎ to be mimed while standing to attention and then forgotten as soon as the moment is over. In short, it is instrumental to our identity as Malaysians sharing the very same meaning and values in shaping our attitudes before we can truly share prosperity as envisaged by Shared Prosperity Vision 2030. Otherwise, it all comes to naught since nothing is really “shared”. Instead, only hypocritical lip service as alluded to in Robert Kuok’s best-selling memoir.

Take the word “kongsi” that is loaned from another culture into the mainstream Malaysian community. Yet its translation in practice is vastly different from what is observed in the original language and culture. Another clear reason why race and religion remains alive since the act of “kongsi” is virtually flawed as a dominant Malaysian lifestyle. And this further allows the vacuum to once again be filled with the same old hostility.

It becomes even more hostile when education fails to be a common platform to nurture national identity as one of the six student aspirations stated in the Education Blueprint.

Fundamentally, Falsafah Pendidikan Kebangsaan (FPK or National Education Philosophy) is intended to provide the framework that nurtures the Malaysian identity first and foremost ground up. But as it stands, the FPK is not shared in a systematic way, when actually it is the most logical place to start.

FPK could be the everlasting philosophy to bridge understanding in a balanced way leading to a more inclusive state of affairs which is equitable and egalitarian in nature. There is no room at all for any form of bigotry and narrow toxic thinking. But where is it today? Unless all this is sorted out we will continue to blame everyone except ourselves.