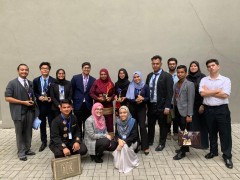 The IIUM MUN also achieved various individual awards and commendations which are:

Congratulations to all of them once again.