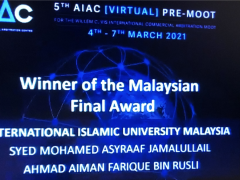 Gombak, 7 March 2021. The IIUM VIS TEAM won the 5th AIAC Pre Moot again this year making it the fourth winnings since the team participated in the competition in 2017.

This year the competition was held virtually, and the team members were competing from their home. At the final rounds which was held from 4-7 of March 2021, the team competed against the team from Brickfields Asia College (BAC) and the session was arbitrated by Datuk Prasad Abraham, Arbitrator Miss Tan Swee Im from 39 Essex Chamber and Prof Christopher Kee, an expert in International Commercial Arbitration Law. The IIUM team members are Aiman Farique, Syed Ashraf, Abdullah Mahzoom and Maryam Khalisa and coached by Mr Eizlan Farhan and Dr Juriah Abd Jalil (the advisor and Moot Master).

In 2017, the team won the championship in the first competition organised by the AIAC and ICC. In 2018, the team won the Best Malaysian team and ranked 4 in the international rounds. In 2019, the team again won the Championship in the Malaysian Rounds and received several awards including the Best Oralist (in both Final Rounds and Elimination Rounds and Best Respondent Outline and Honourable Mention for the Best Outline for Claimant and Respondent). Due to the Covid-19 pandemic, the oral rounds were not conducted however in 2021, the competition was held virtually and participated by many law schools all over the world. Warmest congratulation to the IIUM VIS TEAM 2021.

Congratulations on the Promotion to VK7 (Prod. Dr. Muzaffar)