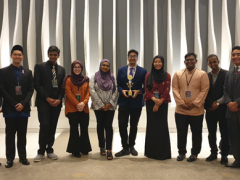 IIUM World Debate and Oratory Centre (IWON) would like to congratulate the IIUM Model United Nations Club for their achievements at the Sunway University Model United Nations (SUNMUN) Conference 2019 held at Sunway University on 12th -14th July 2019. The IIUM contingent was crowned the Best Delegation in the conference. IIUM delegates and award winners are as follows: