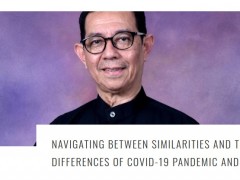 A statement by Dzukifli Abdul Razak.

The COVID-19 pandemic has been likened to a full-dressed SDG rehearsal! Left on its own, the SDG agenda demands the same rigor, commitment and resourcefulness to realize its goal for 2030 for the sake of humanity. Like previous pandemics, COVID-19 caused many disruptions across the globe but there lies one major difference to the former ones as it creates a sense of extreme urgency when millions of  human  lives are lost  regardless of situations, in real life or imagined. This is something the SDG agenda has not been able to do thus far – to be in “panic” mode as stated by the young activist Greta Thunberg and her Fridays for Future movement in the fight against global climate change.  Over a hundred million are already infected with this microscopic virus which creates a sense of “helplessness” in thinking that the fate of humanity is hanging by a thin thread which could snap at any time if we do not change our “unsustainable” ways of thinking and living.

Indeed, after more than a year of uncertainties based on global experiences across humanity, some key lessons from the pandemic cannot be missed. Firstly, there are a number of factors which  are crucial to be in place, namely, issues of availability, accessibility, affordability, appropriateness and also agile approaches. These are the 5As in dealing with the challenges ahead, and they are  well reflected in the 5Ps of the overarching goals of SDGs, namely: Planet, People, Prosperity, Peace and Partnership. In other words, without the 5As being properly understood and instituted, the 5Ps can be a formidable task to achieve.

The issue of “vaccine nationalism”

The pandemic gives plenty of examples in aligning the 5As and 5Ps,  the latest being the issue of vaccine “nationalism” and “inequality.” At the time of writing, the United Nations Secretary-General António Guterres  noted just ten countries having administered 75% of all vaccinations, and remarked that 130 countries have not received a single dose of the vaccine. This is a clear mark of unsustainable and uneven practices leading to more disparities and divides. In other words, although the vaccines (like several other surplus natural resources) are generally available, they remain inaccessible to most due to a number of other factors based on affordability (costs, logistics), appropriateness (efficacy to new variants, local culture) or even agile approach (holistic, futures) among others.

It is not surprising that there is no “one-size-fits-all” solution to a seemingly common crisis facing humanity. However, that does not mean that there is room for any form of “nationalism” (read, exceptionalism) at the expense of global equity in ensuing just and sustainable solutions. The monopoly of vaccines like the “hoarding” of all public goods is  not acceptable by any standard.

The concept of “lockdown”, social solidarity and culture

Another important practical lesson that can be distilled from the pandemic relevant to the case of SDGs and the implementation is the concept of “lockdown”. In the attempt to flatten the curve, the lockdown is not deemed as a mandatory action as demonstrated in many countries in Asia; notably in China, where only three locations experienced the lockdown including Wuhan and Hebei. Similarly, the practice in South Korea, Taiwan, Japan, Vietnam and New Zealand, just to name a few.

This is in contrast to the West as witnessed more recently, involving a large part of the nation, if not the entire country were in lockdown. This can be extrapolated to understanding of the Agenda 2030. The SDGs in the Global North and Global South need not necessarily be attempted in the same way, especially from the perspectives of  development.

In fact, more profoundly the definition of the concept of sustainability as advocated by the Brundtland Report that emphasizes on the “present” and the “future,” and makes no consideration of the “past” is another example. The latter is very much relevant to the developing countries where “sustainable development” (SD) has greater semblance to the local context with respect to the indigenous community and wisdom. ESD too is understood in the same vein where the “past” is not given enough emphasis where as in those communities, there are ample evidence that the concept of SD takes not only different nomenclatures, but is also guided by very diverse heritage and traditions in its application and implementation over many hundreds of years.

Closely associated with this understanding of sustainable development are another 2As, viz., attitudes and aptitudes. Generally, there is a wider understanding and acceptance of conformity, compliance and collectivism leading to more cohesive social solidarity without the need for a lockdown per se. This is backed up by practices of physical (not social) distancing, mask-wearing, hand-washing and so on which are easily executed. In short, cultural context and coding are important elements in putting the ideas into practice using local or traditional framework as the basis of “act local, think global”.

A sense of gratitude for one’s own entire community

Adding to this is the subliminal idea of “gratitude” which is giving back to complete the balance and harmony towards sustainability in the spiritual sense. Spirituality is an integral part of SD in many indigenous communities and globally rooted in the whole-of-person concept that is largely missed under the Brundtland framework. Yet, this notion forms and is shared in the larger human heritage in Asia-Pacific, Africa and Latin America, creating a higher sense of purpose for human well-being and human dignity universally. The relationship of human well-being in its entirety to the whole-of-person concept is clearly felt throughout the pandemic more than ever before. “No one is safe until everyone is safe” comes the reminder that we are integrative “one”. In a way, it conveys the deep sense of “gratitude” for the entire community wherein the roots of one’s lives and well-being are organically planted. Simply put, it reflects on the internalization of one’s role as a trustee and steward of Mother Earth, as opposed to being the “owner”, the concept and the situation as understood and practiced today. The latter has led to exploitative disruptions paving the way to the Anthropocene era, indeed the age of pandemic, which the humanity cannot afford. As such, it points to the importance of approaching sustainability by engaging genuine partnerships in ascertaining that the values of fairness, justice and equity prevail to support the complete SDG agenda to be realized in a decade from now.

Here too the COVID-19 crisis demands the same level of understanding  , in order to avoid the notion of vaccine “nationalism” and “inequity” as mentioned above. More than that there is also the issue of copyright and intellectual property rights of the vaccines being debated currently. As known to the world at large, there is a dizzy (economic) race in the rush to rollout the vaccines globally. It is not only among big pharmaceutical companies worldwide, but also the funders and donors as well as nations that host or own them. Essentially, there is hardly any meaningful sharing that is fully transparent to the eyes of the public who at least in part subsidizes the research and discovery of the vaccines. This is in stark contrast to the discovery of the poliovirus vaccine by American virologist Jonas Salk in the 1950s. When asked who owned the patent on the vaccine, Salk famously responded: “The people, I would say. There is no patent. Could you patent the Sun?” Since then, the Salk vaccine is used worldwide to this day for the successful eradication of the disease.

The key lesson is to put people’s health before profit for the vested few, which unfortunately is not the case for the COVID-19 vaccines so far. Much of the reactions discussed recently at the G7 (virtual) summit are afterthoughts, and they lack authenticity! The ramifications of such actions in hindsight are plenty, including the risk of a prolonged pandemic related to the issues of inequitable vaccine distribution and use. It will further undermine the building of trust and cooperation globally in maintaining international peace and solidarity as a strategic move against COVID-19. In tandem with this, the UN Secretary-General calls vaccine equity as the biggest moral test for the global community. He even pointed out that the coronavirus continues its merciless march across the world upending lives, destroying economies and undermining the SDGs, noting the “wildly uneven and unfair” progress on vaccinations. “If the virus is allowed to spread like wildfire in the Global South, it will mutate again and again”, he warned. “This can prolong the pandemic significantly, enabling the virus to come back to plague the global North.” In other words, the above said full-dressed rehearsal is bound to fail.

Meanwhile, Seth Berkley, the Chief Executive Officer of Gavi, the Vaccine Alliance, said vaccines work against poverty and conflict by giving children the same life chances, when access is equitable. That is further compounded by challenges to the provision of health care in conflict, emergency and fragile settings, where access and infrastructure are disrupted or restricted when most needed, thus further exacerbating deprivations and inequalities, and driving displacement, he noted. Meaning to say, the SDGs will also be affected because they are intricately intertwined with a correlation between conflict and underperformance in immunization and vaccination.

In the final analysis, failure is not an option in the fight against COVID-19 and the achievement of the SDGs. Given the various similarities and differences as discussed, it is imperative that the experiences gained from the pandemic are put to good use in eliminating the COVID-19 crisis as soon as possible and accelerating the achievements of the SDGs for shaping a more sustainable post-pandemic world at the same time. By adopting the Sustainable Development Goals 2030, and the promise of “leave no one behind” principle, the skillful navigation between the life-threatening pandemic and the life-harming development crisis remains a top priority worldwide framed by the five imperatives using the acronym COVID: collaboration and cooperation; openness and out-of-the-box; values-based and vigilance; inclusive and integrity; and diversity and discipline. These will be helpful in reminding us the way forward in navigating between similarities and the differences of COVID-19 pandemic and (E)SD.

Prof. Emeritus Tan Sri Dato’ Dzulkifli Abdul Razak is a member of ISDL’s advisory board. He is an educationist and scientist. He was a chairman of the board of directors of Universiti Sains Islam Malaysia, and rector of the International Islamic University Malaysia.