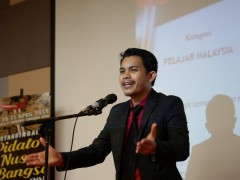 This is an IWON’s practice to have a comprehensive selection exercise twice a year- once for the Asian Debate Season early in the year and once for the World Debate Season during the second half the year. Selection exercise contains intensive practice sessions that test the contestants in terms of their knowledge and debate skills.  Selection criteria also includes students’ commitment to training, reading, discipline and academic CGPA. Trainers and alumni recommend teams for international tournaments based on the above criteria which is then endorsed by IWON. Following this process, IWON has finalised the students who will represent the IIUM at the upcoming United Asian Debating Championship, Hanoi and Australasian Intervarsity Debating Championship, Bali to be held respectively during 24th – 30th June and 1st – 8th July 2019. IIUM teams have started preparing for the said tournament

Upon request from the Political Science Student Society, IIUM English Debate Club collaborated with them by providing 2 debaters and a moderator for the public debate organised by them. The motion for the debate was “That Malaysia should grant refugees legal status by signing the Refugee Convention”. The IIUM debaters (Aida Liyana and Irtza Soomro) debated in team with Assoc. Prof Dr. Tungku Mohar (Pol Science Dept) and Dr. Mohd Yazid Zul Kepli (AIKOL) respectively. IIUM Debater Sr. Tinir Mohamed Sadi (KICT) moderated the debate.