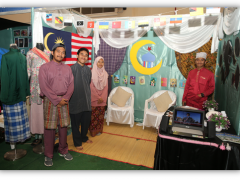 Board of Foundation Institute had organized the 4th Cultural Festival on 11 March 2019 at Al-Hazim Hall, University Of Nizwa, Oman.  The purpose of this event was to promote and present the culture of each country in the world that will represent by the students that came from various country. Such as Oman, Egypt, Jordan, Malaysia and Palestine.

The event started with Opening Ceremony at Al-Shahba Hall by recitation of Holy al-Qurab by Br. Ahmad Adil Luqman from Malaysia followed by the speech from the advisor of Foundation Institute, Dr. Ahmad Ar-Rahbi. The ceremony continued with theatre and multimedia presentation that prepared by the committee. There were also performance and poems reading by the lectures.

After the opening remark, the event continued with Cultural Educational Exhibition at Al-Hazim Hall. There were many booths and performances by all the representative of the countries. Hence, IIUM students had took the opportunity to promote about Malaysia in term of its cuisine, tradition food and clothes, cultures and the most interesting place at the country. Besides, IIUM students also prepared and cooked the Malay traditional foods such as mee goreng, jemput-jemput pisang, sagu gula Melaka, ondeh-ondeh, kek batik, bubur kacang and ice cream Malaysia.

All the representatives of various countries should perform a performance that present the country. Therefore, IIUM students also had prepared a performance like theatre, sajak, seloka and song from Malaysia that lead by Br. Hanif and Sr. Fathen Sofea.

The students were interesting to know more about Malaysia and enjoying the performance. They also took the chance to take pictures at our booth and taste the food.

The event end on 4 pm. Even though we were quite tired in preparing the booth, but we were satisfied and happy because we were given the opportunity to join this festival and had a chance to show the culture of our country as well as the event was going smoothly.