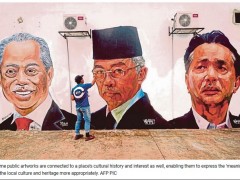 Vandalism a form of hatred that must be eliminated

THE news of the vandalism on a mural completed recently is yet another display of plain irresponsible behaviour. This is not the first time, though. It has happened many times before.

For example, during the opening of the Mass Rapid Transit, vandalism also reared its ugly head. These were among the more prominent ones that caught the interest of the public and media alike. There were many others that were low profile involving public facilities and utilities, which were so common that they surprised no one any more.

The same can be said about "artworks", like wall paintings and street art, which are now celebrated worldwide as they can capture the spirit of a place. These places have been turned into photo opportunities, especially for tourists who want to remember the magical moments. Tourism hotspots, like Penang and Melaka, are two such places where even foreign artistes have come to display their talents. Local talent is beginning to pick this up in other locales as well.

One example is an artistic piece depicting a local bread seller, who has become synonymous with the place. These are among the more prolific ones because they are connected to a certain place's  cultural history and interest as well, thus enabling them to express the 'meaning' of the local culture and heritage more appropriately.

They can even act as reminders to the community. In Mexico, I recall paintings that depict the country's historical events, some displaying the heroic acts and sacrifices of past generations. They become open history lessons for the younger generation in discovering their self-identity.

In Montreal, I remember beautiful wall paintings that enhance the structure of buildings, which would otherwise look very bland and dull. A colleague wrote about them in a thesis, which earned her a post-graduate degree from a Canadian university. It goes to show that public artworks have merit in their own right.

My best experience, however, is in a place called Tongyeong in the southern part of South Korea. A village there has been literally turned into a living canvas, where virtually all facets of the village, including some parts of the streets, are covered with artwork.

The story has it that the village was once dilapidated and the powers-that-be wanted an easy way out by demolishing it. But the villagers came up with an idea to brighten up the situation by inviting local artists and talent to participate in the process. Fast forward and the village is now a tourist attraction and a money-spinner.

There is virtually no facade of the village that's left untouched, turning them into various works of art depicting history, world events, personalities, nature, billboards, 3D images and many more that spark the imagination. There's no doubt that this village is now thriving.

One is not wrong to characterise this as a cheaper form of urban renewal that preserves rather than destroys, all because of the unlimited appreciation of public display of artistic talents, which portray the good and nurture positive values projected to ordinary folk on the street.

Unlike conventional art galleries which are accessible only periodically — and some even charge entrance fees — public art forms are always available to all who are interested, even to those who want to contribute a piece or two.

Fortunately, in those places, vandalism is overwhelmed by people enlightened enough to appreciate other people's contributions, even though some are not able to 'admire' what's on display. It has been argued that vandalism is also a public art form, but then it must be the worst of its kind as it brings out only the ugly side of the person, expressing hate.

Such art form has no place in a world that is already saturated with hatred and ugliness. Malaysia is no exception, across both the real and virtual worlds. There is simply no room in public spaces to accommodate such a toxic expression in its search to build a better Malaysia as we look forward to the next Merdeka, barely a month from now!

WELCOME TO THE DAR AL-HIKMAH LIBRARY