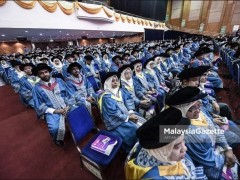 MANY universities are having their convocation ceremonies. The events are in high demand for many reasons. Not least, it is a time for graduates to be recognised by their peers after putting in so much of effort to secure their credentials.

It used to be a passport to the world of work. But not any more – at least not as readily as before because things have changed. That “things” include education itself as it was once perceived. Indeed, Unesco (United Nations Educational, Scientific and Cultural Organisation) is now publishing think pieces from different experts around the world entitled Futures Education. What these are is hard to tell.

This means that unless we get education “right”,‎ work will continue to be problematic, more so for the future in coping with transformation of the marketplace and industry without sacrificing autonomy, dignity and values. If automation is shaping the future of work where then are the elements of values like passion, sympathy and empathy.

This question comes to the fore after listening to several of the valedictory speeches during various convocation sessions. The speakers were certainly high achievers in their own right. Academically, they were single-minded in attaining their wish in life through education. It did not seem to matter what disciplines they are associated with.

In fact, their technological competency is not an issue, so too the general ones. What is of concern however is the dimensions that are affecting the more human dimensions. In short, it goes beyond the competencies mentioned. That includes the ability to connect as many dots as possible, making decisions based on uncertainties or disruptions, communicating cross-culturally and transdisciplines as well as the respect for ideas rather than authorities.

Like it or not these are not taught as part of today’s education, neither is learning organised along these lines. This is indeed the “new” education that is emerging over the horizon – total, transformational and transversal (3Ts). It is above all complex which by definition is characterised by “the behaviour of a system or a model whose components interact in multiple ways and follow local rules.”

This implies that there is no “reasonable” higher instruction to define the various possible interactions. This last sentence alone is sufficient to argue how far behind is education in the VUCA (volatility, uncertainty, complexity and ambiguity) world. And Malaysia is one that is most affected given its steep hierarchical and bureaucratic structure educationally speaking.

As we write, the unfolding of the “streamless” education is a cause for concern where complexity might well be the spanner that messes up the whole model going by the latest news reports. As of late, “science” (the knowledge not discipline) has taken various unconventional approaches in characterising “complexity” in education. Yet we remain at a standstill.

This is evidently clear from the ongoing convocation ceremonies which are very much a reflection of an archaic 19th century factory-like production system or model, as we spew words about 21st century (seamless) learning in delivering education for the future (which one ?).

With some four decades of experience in education, the writer believes that “another world is possible”. Comments: letters@thesundaily.com