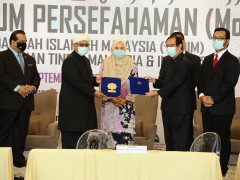 Rector, Prof. Emeritus Tan Sri Dato’ Dzulkifli Abdul Razak and Deputy Rector (Student Development and Community Engagement), Assoc. Prof. Dr. Zulkifli Hasan, were among the delegates from IIUM to sign the MoU with the rest of the institutions.

According to Nasruddin, the MoU will build a collaborative engagement with higher education institutions which include lecturers, students in all aspects including education, social, community engagement and others.

“YADIM is in a plan to build a research management centre where we want to gather all academicians in YADIM in all aspects for development of dakwah and human capital in Malaysia,” Nasruddin said.

“We are very positive that the cooperation will strengthen relationship with all institutions and benefit all parties and increase the Islamic value as well as further energise the dakwah initiative in the county,” he said.

In her speech following the signing of the MoU, Dr. Noraini said the institutions of higher learning play a big role in producing competent expertise for the country especially in developing the country’s human capital, where YADIM has done a tremendous step to join with the institutions in spreading the Islamic values.

“The cooperation among YADIM, the higher institutions and the religious school coincides with the time and it is hoped that the result will contribute to the community in making a sustainable community. This understanding can be used as an example to other institutions in sharing expertise through academics and forming a strong network in spreading the message to the ummah,” Dr. Noraini said.

According to the Rector, today’s MoU is an important occasion as it focused on disseminating Islamic understanding and beliefs through journals, articles and research in particular.

“We are advised to disseminate and impart knowledge in Islamic perspective in which IIUM has done it for years and we will continue doing this for the betterment of the community inside and outside IIUM.”

“IIUM will take this opportunity through the platform provided by YADIM in its journals and articles, thus encouraging educators and students to write more consistently and convey their expertise in writings,” the Rector added.

Meanwhile, Dr. Zulkifli said Sahabat Yadim Club in IIUM is an entity that is active in upholding Islamic teachings.

“Our students are in the midst of producing a new narrative in dakwah which is called universal dakwah. It is hoped that the society will become more harmonious through its strategic and innovative dakwah programmes,” he said.***