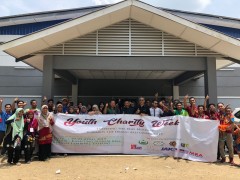 This programme is a collaboration programme with various agencies such as JAKOA, JAKIM, PERKIM Pahang, SK. Sg. Mas and Dapur Infaq Pahang. Focus of the programme is to bridging the gap between IIUM Community and Orang Asli Community in Pahang, at the same time enhancing the knowledge of Muslim Orang Asli community on basic practices of Islam such as recitation of surah and also Fardhu Ayn enhancement. Furthermore, this programme also gives a great exposure to CFS IIUM student in community engagement activities and also enhancing their soft skill.

Variety of events during the programme: