Since the foundation of the university in 1983, IIUM has been seriously striving towards producing fully functioning insan who will serve as agent of change. Efforts to market the students have been strategised to ensure that the trained workforces are accordingly placed in related places.

The Alumni Relations Section (ARS) was established in 1999 as a university’s agency under the purview of Admissions and Records Division, focusing on alumni relations and activities. However, the Unit evolved to become an agency of the university in 2005 which covered not only alumni matters, but also IIUM student career services. In 2017, after a restructuring of responsibilities, it is renamed as the Alumni Relations Division.

The Division is the liaison between the university and its graduates. Apart from obtaining input from the alumni on various matters, the Division also promotes the achievements of former graduates and keep them abreast of developments at the university.

To date, IIUM has produced more than 96,000 alumni from 125 countries who serve as agents of change to the world, spreading the IIUM mission nationally and internationally. The majority of them serve both public and private sectors worldwide and provide significant impact on their communities and countries. The IIUM international alumni, via its Alumni Chapters, have been established in 31 countries, such as Thailand, Indonesia, Bosnia and Herzegovina, the Republic of Maldives, Australia, Saudi Arabia, Singapore, Oman, China, Bangladesh, Gambia, Republic of Guinea, Sri Lanka and Turkey. As for the local IIUM Alumni Wings, they exist in Sabah, Sarawak, Johor, Kelantan and Kedah. There are also 7 interest-based Wings established, such as the Royal Malaysia Police (RMP) Alumni Wing and Persatuan Seni Silat Cekak Malaysia (PSSCM) Alumni Wing.

Among the main purposes of establishing alumni chapters/wings are to enable the alumni to conduct activities for themselves as well as for the development of the university. The chapters could also assist in promoting IIUM to the world by becoming the referral point for potential IIUM students.

The ARD strives to engage in beneficial lifetimelink between IIUM, Alumni and the community to contribute towards the realization of mercy for all humankind (Rahmatan lil alamin)

*IIUM Alumni can get the latest updates on all alumni activities and news from the IIUM Alumni Portal by clicking the button below: 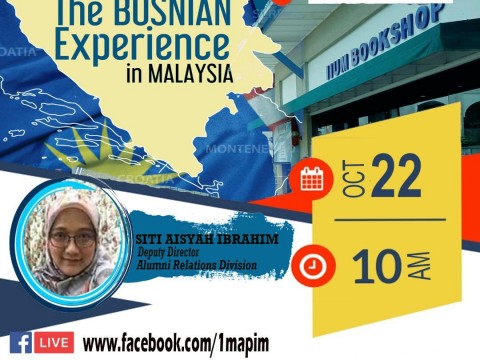 Live Book Talk with the editor of the book entitled Humanising Education: The Bosnian Experience in... For the first time in IIUM's history, the university has gazetted 10th October to be celebrated as I... Fintech and Islamic Finance In The After... Book Review: Humanising Education: The B...