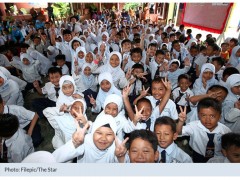 FOLLOWING International Men’s Day on Thursday and World Children’s Day yesterday, this is a reminder that we need to think about how we raise boys and men in a world of women empowerment and gender equality.

The movements for gender parity and women empowerment are taking centre stage at the global and national levels. Women leaders are being celebrated for being elected and for leading their countries effectively through the Covid-19 pandemic. Women are also taking a stronger stance through their recent pledges at the Beijing+25 forum (which marked the 25th anniversary of the adoption of the watershed Beijing Declaration and Platform for Action in 1995).

Locally, Malaysia is seeing more movement on gender rights issues like child marriage, ending violence against women, paternity leave, and period poverty. These actions have mostly been spearheaded by women and are often misconstrued as female only issues. Gender equality is not a female issue.

While there have been the handful of men who have publicly pledged their support for gender equality, this fight still appears to be understood as women’s. Gender equality actually benefits all. Yet women empowerment is misunderstood as a threat to men.

When women come forward, our men seem to move backward. When we make space for our girls, our boys are not sure how to manage so they take a step back. The empowerment of women and girls seems to be perceived as threatening and disabling to men and boys. This threatens the very idea of gender equality.

The empowerment of women and girls does not threaten men and boys. We are not competing against each other. We need more boys and men to push for gender equality but they will not do that if they feel threatened or disconnected from the issue. And they are not, far from it. More men dying from suicide is a gender issue. Addiction, crime and violence among men are gender issues.

We need men to come forward to speak up for gender equality. To be good role models for children to look up to. There has been too much stigma and misconception around gender equality.

We are raising men every day and the younger generation is easier to train, naturally they can accept gender equality – in fact, they can’t imagine or understand the alternative unless, of course, that is what we teach them. Girls and boys can do housework, they both deserve to go to school, they can all be bright, funny, caring, intelligent and strong. Girls and boys, women and men all have emotions and need support and care, it is not a weakness, just part of being human.

As we progress with women empowerment agendas – albeit slowly – we need to understand that we are all part of the same system. So we need to ask ourselves how do we raise men who will be able to work alongside empowered women without feeling threatened? How do we raise men and boys who are able to communicate their emotions and get help when they need it?

Our children are watching and learning from us every day. We need to start having these conversations.