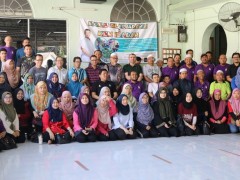 GOMBAK, 14 October 2019: The Ibadah Camp conducted last Saturday (12 October) in Kampung Sungai Chinchin within the vicinity of IIUM campus in Gombak district was somewhat special, for this time the campus community comprising lecturers, staff members and students went down on the ground to meet with the villagers for an engagement project to strengthen the bonds of ukhwah, the Islamic way.

It was jointly organised by the Department of Communication and Department of Usuluddin of the Kulliyyah of Islamic Revealed Knowledge and Human Sciences (KIRKHS).

Kampung Sungai Chinchin is one of the traditional villages in Gombak district, situated 13km from Kuala Lumpur.  A total of 60 participants from IIUM took part in the camp. The programme received good support from the villagers with more than 150 villagers, including kids, turned up for the event.

The contents of the Ibadah Camp normally included motivational talk related to the halal gap between men and women, and the teaching of Quran focusing on the youth. Above all, activities organised under the Ibadah Camp are in line with the university’s mission towards the Islamisation of daily life.

“Previously we used to conduct the ibadah camp with staff members in campus. But this time around, following an instruction from the Office of Deputy Rector, we have to conduct an engagement programme with the community outside,” Mr. Amran Baharum, the coordinator of the Ibadah Camp programme told IIUMToday.

This time the Ibadah Camp was divided into two parts. The first part was the outdoor activities conducted with the kids. There were games and gotong-royong activities with villagers at the same time. The second part focused on the talks on several aspects of Islamic teachings which were held in the mosque.

The games were handled in the field by Communication Students Association (COSA) committee members involving kids from the village playing dodgeball and football. At the same time, lecturers, staff members and adults carried out the gotong-royong activity near the mosque. They cleaned up the mosque and painted the mosque’s fence.

The village head of Kampung Sungai Chinchin, Mr. Ahmad Sofian Bin Abd Rani said, “We were looking forward for a very long time to have such collaboration between our village and the IIUM community. Since there are many academics from different backgrounds, we were hoping that we can receive help especially related to knowledge.”

“I am very happy to see the collaboration and we hope that we can have many more activities together in the future. Since there’s an expertise in Communication Department, we hope to see a special video related to the history of the village in future,” Sofian added.

Overall, the Ibadah Camp was a success since it had created a strong bonding between the IIUM community and the villagers of Kampung Sungai Chinchin.

The programme included good elements on the Quranic teaching. It has also encouraged and motivated the participants to put into practice the reading of the Quran in their daily life. It reminded Muslims of the teachings of the religion and their duties to Allah SWT, as well as their role in society.

Asked for his view on the overall running of the programme, Amran Baharum said, “I can say that this has been a successful event, but a lot more could be done. This is just the starting point, and we could do more in future as a follow-up.”