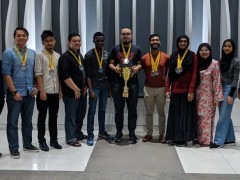 IIUM World Debate and Oratory Centre (IWON) would like to congratulate the IIUM English Debate Club for its achievements at the Malaysian National Universities Debating Championship 2019 organised by the Malaysian Institute for Debate and Public Speaking.  The championship took place from 19th to 21st April 2019 at the Sunway University. IIUM has participated with 6 teams and 6 judges in the tournament. After a highly contested debate in the grand final against the host, Sunway University, on the motion that ‘Malaysia should impose a one-off emigration tax on individuals that choose to emigrate, proportionate to their contributions to the state (e.g. working professionals and star athletes)’, IIUM team 1 was crowned the Champions of the tournament.  IIUM debaters and teams received the following awards: