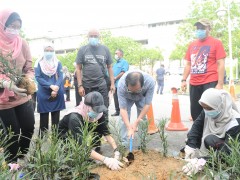 IIUM to showcase its champion in year 2023

GOMBAK, 22 September 2020: The year 2023 is a momentous year in which IIUM will be celebrating its 40th anniversary since its inception in 1983, Prof. Emeritus Tan Sri Dato’ Dzulkifli Abdul Razak said when officiating the IIUM Gotong Royong 2023 which was held at IIUM Health and Wellness Centre (IHWC) on Monday.

He said that IIUM is on its way to reach the peak of its achievements, therefore IIUM needs to start preparing for it mentally and physically.

The event, which was organised by the Office of the Rector, International Islamic University Malaysia (IIUM), involved all top managements of IIUM including the Deans, Directors, uniform bodies, Daya Bersih Sdn Bhd (DBSB), staff and students of IIUM.

The Rector said: “We need to present to the public what this campus is all about whereby IIUM is an exceptional campus, it is well constructed but the question now, is how do we maintain it?”

“We have 1,000 days to do it and hopefully at the end we will able to maintain the campus. Realistically we do not have enough money to maintain the campus, hence we need to work together in achieving this. Besides that, this is also part and parcel of Rahmatan lil Alamin and the sustainable development goal in order to ensure IIUM be maintained as it is and be proud in doing so,” he added.

The Rector chose IHWC as the venue because the centre belongs to everyone and has benefitted many on the campus. He felt it is time for IIUM to improve the centre, after 20 years of its services, by “making it lively, effervescent and clean so that everyone can have a positive environment when he or she visits the centre.”

Meanwhile, according to Chief Medical Officer of IHWC, Dr. Siti Masitah Jamaludin, the centre is honoured to be selected for the gotong-royong activity and she is looking forward for the betterment of its services to IIUM community.

“Finally, we have something for the clinic after over 20 years of its services. It is indeed a good beginning for everyone of us and hopefully after this everyone will feel welcome and motivated to come to the clinic,” she said. ***