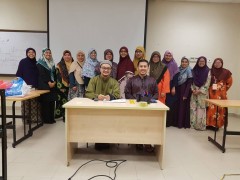 1On 1 & 2 August 2019, Malay Medical Manuscript as Sources of Knowledge (IIUM flagship hosted by KAHS) organised a workshop on "Jawi" Transliteration. The workshop was participated by 25 staff and the sole presenter for the workshop was Asst. Prof. Dr. Mohd Affend Mohd Shafri who is also the flagship leader.

The two-day programme discussed about the vision and mission of the flagship, Malay medicine, research on Malay Medical Manuscripts from modern science perspective, aiding tools for "Jawi" transliteration, origin of Malay, civilisation and history of Malay, and scholars in Malay civilisation.

The participants were given a chance to have hands-on experience on how to read Malay Medical Manuscripts which require various skills. In the end, the participants presented their transliterated manuscript to the members of the workshop.

It was indeed a fruitful workshop and worth the two days. This is a starting point of the flagship to instill the enthusiasm and awareness especially among IIUM researchers to start looking at our forgotten treasure which are slowly decomposing. To let those be decomposed without harvesting the information contained, it is a great loss for the nation.