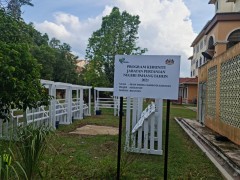 On 21st September 2021, the Kulliyyah has received a sponsored project from Jabatan Pertanian Negeri Pahang in the form of 10 sets of Aquaponic Farming System worth RM10 000. This project is in relation with MyULAM project that has been established in the year of 2020. It will serve as the income generation wing for the whole MyULAM project so that it can self-sustain in terms of finance.

The project insyaAllah will start when the new semester opens where the students will also help in kickstarting the project. This will also give out-of-class experience to the students and educate them on how to establish a farming garden in the backyard. These are some photos taken when the sets were being assembled.