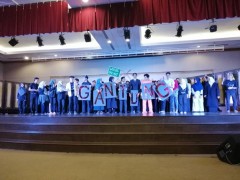 MeLEX in collaboration with Creative Multimedia Club (CMC) and MRC Khalid al-Walid successfully organized Legal Sketch 2019: GANTUNG. It hit the stage on 21 April 2019 (8.00 pm – 11.00 pm) at Grand Hall, OCD, IIUM Kuantan. Legal sketch has been an annual program of MeLEX for many years now due to the high effectiveness rate of the program and the irreplaceable experience that the students obtain from the development of the legal stage.

Among the objectives of the legal sketch is to give exposure to the students and audience on the structure, process, administration and jurisdiction of courts in Malaysia. The sketch was based on the cases of K.J. Barlow v Public Prosecutor and B.G. Chambers v Public Prosecutor. Barlow and Chambers were two men from Australia who were arrested at Bayan Lepas International Airport for trafficking 141.9 g of heroin. Though non-Malaysians, at that time, strict drug laws have been recently imposed and they were subject to Malaysia's mandatory death penalty for possession of drugs over 15g.

The case received worldwide responses, especially from the United Kingdom and Australia. The mother of accused even wrote a letter to the Queen of England, begging for mercy for her son. Both men were hanged to death in 1986.