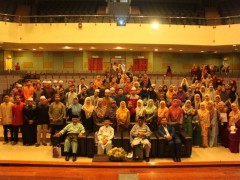 GOMBAK, - In a mission to recognise the important roles of the Mufti institution in issuing nonbinding opinion (fatwa), a forum titled “Mufti Tetap Di Hati” was held at the Main Auditorium, IIUM last Tuesday (24 September).

Unlike any other forum, Professor Emeritus Dato’ Paduka Dr. Mahmood Zuhdi decided that both of the Mufti should stand up and present to the audience instead of answering questions as this is his style of moderating.

The Appointment of a Mufti

The Mufti of Pahang, in his speech highlighted that the roles and the process of choosing a mufti cannot be politicised. Even his duty in issuing fatwa cannot be inclined towards any political party. Therefore, there is no grand election during the process.

He further said that there are distinguished differences in the duration of service for the Mufti between states.

“The Mufti of Kelantan will be a Mufti his whole life until death, unlike Pahang. My responsibility as the Mufti of Pahang will carry on until my sultan tells me to stop.”

This is further explained in Section 34 of Enakmen Pentadbiran Negara Islam 1991 where the appointment of a mufti is under the decision of the sultan and constricted to his conditions and pre-requisite.”

He added, “A Mufti from a state with no sultan will serve and receive their appointment directly from the Yang di-Pertuan Agong.”

The Main Role of a Mufti

On the other hand, the Mufti of Melaka is keener towards highlighting current issues in sharing the most important role of a mufti.

“Islam is a universal religion, a fatwa can be amended over time where it fits. Therefore, the most important role of a mufti is to discuss and refer to other scholars as well before issuing a fatwa.

They are responsible to help the public to avoid misunderstandings. A fatwa can only be issued when it has reached a consensus.”

He criticised that in the case of the freedom of speech, the fatwa keeps on getting vandalised and disrespected under the impression of “Who cares about the fatwa?”

In his concluding remark he urged, “We are facing a crisis in the Islamic community where we unanimously agree to disunite. I implore the younger generation to be the kind of people of competency and understand the reality of life.”

The forum was a cooperation between three distinctive divisions which are the Mahallah Halimatus Sa’adiah Representative Committee, Department of Fiqh and Usul Al-Fiqh, KIRKHS and Majlis Dakwah Negara (MDN) which collaborated to highlight the institution of Mufti.

The forum concluded with a Question & Answer session which addressed mostly on current issues that intrigued the attendees.***

Narrative will change if Muslims are involved in Capitol siege

Flattening the curve of human tyranny