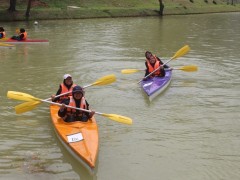 About 32 ECONSS members attended the championship and were supervised by the sports department.  The attendance showed most of the ECONSS members had high competing spirit. Students from other society were also attracted to join the championship. Some rubbish at the lake somehow made canoeing harder. Hopefully the cleanliness of the lake will be better for future events.

The event's registration started at 8 a.m. The event had strengthen relationships and increased trust among ECONSS members for they had to participate in pairs to win the championship.