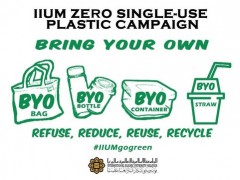 GOMBAK - -  As one of the initiatives to eliminate the habit of using plastic among IIUM community, IIUM Development Division introduced the four Rs’ (Refuse, Reduce, Reuse, Recycle) in a campaign called, IIUM Zero Single-Use Plastic, launched today at Rector Office.

According to IIUM Rector, such initiative is part of the IIUM’s slogan to lead and strive for sustaining the campus environment.

“In IIUM, we are promoting not only reducing, reusing and recycling but also refusing,” he said adding that refusing is the key reason to not use the plastic if there is no answer for how to destroy the plastic.

Meanwhile, its Chairman of IIUM Plastic Waste Management Committee, Asst. Prof. Dr. Azlin Suhaida Azmi cited that Malaysia has been ranked as the 8th worse plastic management in the world, which explained the importance of having the campaign.

“Throughout this campaign, the little changes are promoted starting from the zero single-usage of straws, plastic cutlery and mineral water bottle,” she said.

Congratulations to the KOP recipients of FRGS 2022