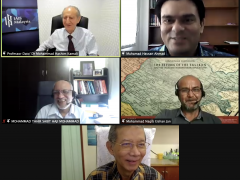 Gombak. 17 September, 2021. The people of Afghanistan deserved peace and reparations after being invaded by the Soviet Union and the United States of America which resulted in decades of war. The withdrawal of the United States of America need not necessarily means the end of killings of civilians such as in the case of Zemari Ahmadi’s family of 10 including 7 children by the USA drone strike in Kabul on 29th August 2021.

Prof Muhammad Naqib Eishan Jan impresses on the need for the de facto temporary or otherwise of the Taliban government to show to their people their seriousness to be inclusive and respecting the rights of the people.  He highlights the different principles in recognising a government of a State which include on the de facto basis.

Prof Abdul Ghafur Hamid underlines that international law provides for reparation to a country that was unlawfully invaded. Looking at the approach of the Taliban that would like to improve their track records in governing and to gain recognition from other countries, he suggests that engagement is the way forward.

Prof Najibah Mohd Zin calls for avoidance of misrepresentation of treatment of women under Shariah. In interpreting the sources of Shariah, the context and specification should be carefully considered. She stresses for due consideration in applying Shariah to the potentials and needs of women since they have legitimate roles in the society.

Prof Dato’ Mohammad Hashim Kamali, the CEO of the International Institute of Advanced Islamic Studies concludes the Roundtable Discussion. Since we do not know the exact regulations that the Taliban will apply, he hopes that the Taliban will respect the rule of law in Shariah and the proper treatment of women rights. The people of Afghanistan expect moderation and the society could actively engage with the Taliban to convince them to be moderate as envisaged by Shariah. He calls for the international community to continue to engage with the Taliban.

Prof Farid Sufian Shuaib, the Dean of Ahmad Ibrahim Kulliyyah of Laws, International Islamic University Malaysia hopes that the Roundtable Discussion contributes to the appreciation and understanding of the dire humanitarian needs of Afghanistan, a product not only of the withdrawal of the United States of America and the return of the Taliban, but because of the decades of war from invasions by the Soviet Union, the United States of America and the civil war. He refers to the statement of the United Nations Secretary General Antonio Guterres in the High Level Ministerial Meeting about the fate of the women and children of Afghanistan which are the most vulnerable groups in any war and armed conflict. The hope of the world is to see a peaceful Afghanistan, a country consists of decent, intelligent and proud people who had not the opportunity to contribute fully to the world.