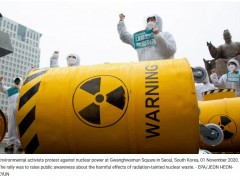 Towards a nuclear-free world

OCT 24 marked a historic milestone, when the Treaty on the Prohibition of Nuclear Weapons (TPNW), or the Nuclear Weapon Ban Treaty, came into force. This followed the ratification by the 50th country, Honduras, making it legally binding in comprehensively prohibiting nuclear weapons.

Malaysia did its share on Sept 30, being the 46th signatory with the aim of the total elimination of the fatal armament. Malaysia signed the TPNW as soon as it was opened for signature on Sept 20, 2017. By ratifying the treaty, Malaysia is contributing to the TPNW entering into force, and it encourages other states to follow suit.

Ratifying the TPNW is Malaysia's tangible effort in advancing the cause of nuclear disarmament on the international stage. It also reaffirms Malaysia's unwavering commitment and support towards the total elimination of nuclear weapons.

Adopted on July 7, 2017, it takes a little more than three years for the treaty to go into force on Jan 22, that is, 90 days after the 50th ratification. The TPNW "prohibits the development, testing, production, stockpiling, stationing, transfer, use and threat of use of nuclear weapons, as well as assistance and encouragement to the prohibited activities".

Finally, any direct or indirect "control over nuclear weapons or
other nuclear explosive devices" is forbidden. Party states will be
obliged to prevent and suppress any activity prohibited under the TPNW
undertaken by persons or on territories under their jurisdiction or
control.

The treaty also obliges party states to provide adequate assistance to individuals affected by the use or testing of nuclear weapons, as well as to take necessary and appropriate measure of environmental remediation in areas under their jurisdiction or control contaminated as a result of activities related to the testing or use of nuclear weapons.

The International Campaign to Abolish Nuclear Weapons, pioneered by a Nobel Peace winner inspired by a Malaysian, played an important role in building demand for urgent action to advance nuclear disarmament.

Reportedly, nuclear weapons — unlike chemical weapons, biological weapons, anti-personnel landmines and cluster munitions — are not prohibited in a comprehensive and universal manner. The Non-Proliferation Treaty of 1968 contains only partial prohibitions, and nuclear-weapon-free zone treaties prohibit nuclear weapons only within certain geographical regions.

When the treaty was passed, it took 122 in favour, one against (Netherlands), and one official abstention (Singapore). Sixty-nine nations did not vote. As expected, among them were nuclear weapon states and North Atlantic Treaty Organisation members, except the Netherlands. This is important to know to provide the appropriate perspective as to how to carry out this mission forward.

However, this year being the 75th anniversary of the atomic bombing of Hiroshima and Nagasaki on Aug 6 and 9, respectively, brought a very unique significance to the achievements made. After all, lives are still being lost today as a result of the bombing some seven decades ago, and counting. In other words, as long as there are nuclear weapons around, the numbers of lives that would be potentially lost remain unimaginable. That implies an effective deterrent is imperative, the TPNW being one of many.

Adding on to this is the fact that this year is also the 75th anniversary of the United Nations, which makes the event even more meaningful to a world that has taken so much beating of late. Although there is no nuclear bombing as such, the net effect globally is close enough to the fateful day, if not worse off given the numbers who are affected and displaced are said to be largest in human history.

Now the TPNW is fully ratified, the International Islamic University Malaysia (IIUM), being an activesupporter of Malaysia's position, hopes that it will set a clear change in the nuclear disarmament narrative from one dominated by the nuclear weapons and nuclear-armed states, to one which is more democratic, equitable and peaceful, where all states have an equal voice and responsibility to act.

Like Malaysia, IIUM, too, calls on all peace-lovers to continue the good work done thus far by reaffirming that "peace starts with me" as a powerful motivation to forge solidarity with other partners in realising the long-overdue goal of a world free of the threat of nuclear weapons.

Ensuring quality education during a pandemic