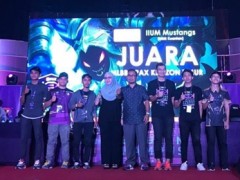 Centre for Foundation Studies (CFS) has sent two teams consisting of 6 person each to compete in the Xpax Kejohanan E-Sukan Kampus (XPAX KEK) which was held at UniSZA, Terengganu on 11th to 13th April 2019.

XPAX KEK is an e-sport championship organised by My Game On and Kitamen with the objective of encouraging the spirit of sportsmanship and at the same time discovering new talent of E-sport among the students.

The E-sport was held at 5 different zones and the champion for each zone will compete at the grand final which will be held at Sunway Pyramid, Petaling Jaya, Selangor. There are only three different game categories contested namely Mobile Legends Bang Bang, Pro Evolution Soccer 2019 and DOTA 2.

One of the teams sent is IIUM Tech Ninjas which emerged as the champion in Mobile Legend and DOTA 2 categories. The other team, IIUM Mustangs only managed to reach Quarter Final.

As the Champion for East Zone, IIUM Tech Ninjas will compete at the Grand Final of XPAX KEK.