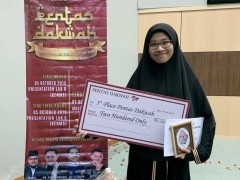 GOMBAK- - “Your performance was full of confidence.” This was the comment made by one of the judges of Pentas Dakwah 4.0 on the winner of the competition, Nurul Balqis.

Assoc. Prof. Dr. Ramizah, a lecturer at the Department of Islamic Law, Ahmad Ibrahim Kulliyyah of Laws (AIKOL), praised Nurul Balqis Dania binti Ahmad Shahaili for her excellent performance during the first round of the competition as a finalist of Pentas Dakwah 4.0 held at the Moot Court, AIKOL, on Wednesday (9 October) night.

Nurul Balqis who spoke on the topic “Can I be Him?” is a third-year civil law student currently studying at Universiti Teknologi MARA (UiTM).

One of the highlights of her performance in the first round was when she stated that there was no role model as perfect as Rasulullah SAW which was supported by a verse in Surah Al-Ahzab.

“There has certainly been for you in the Messenger of Allah an excellent pattern for anyone whose hope is in Allah and the Last Day and [who] remembers Allah often.”

During the second round, she was paired with one of the other contestants, Mohamad Hafiz bin Mohd Zaki. They were given the topic “Bulat Air kerana Pembetung, Bulat Kata kerana Muafakat” and made an amazing performance to elaborate the Malay proverb which included a little bit of acting at the start.

Her overall performance was so impressive that she gained the highest number of votes from the audience even before the start of the second round.

Both her parents were also present to give moral support to their daughter who was contesting that night.

​LIGHT IS SELECTED AS A FINALIST FOR THE INTERNATIONAL GREEN GROWN AWARDS 2020!