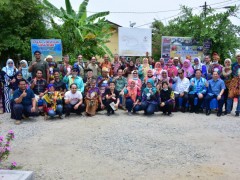 IIUM expands its strategic partnership to community in Terengganu

The three-year strategic partnership aims to expand and share expertise between institutions and the community through education. IIUM has chosen S.K. Gong Tok Nasek to be its adopted school and KRT Kg. Gong Baru as its adopted community in realising the sustainable development initiatives and contributions to the community, which is also part and parcel of education.

According to the Rector, IIUM is now working vertically and diagonally with the school and the community where these groups need to work together and support one another.

“The next model is to combine the school and the community to move this initiative forward by bringing our expertise from IIUM to build the Internet of Things (IOT) to manage the Sejahtera Garden in S.K Gong Tok Nasek,” the Rector said.

Meanwhile, Chief KRT of Kg. Gong Baru, Mr. Mohd Hanafiah Ismail, expressed his gratitude to IIUM for taking Kg. Gong Baru as their strategic partner with SLI and hope this initiative will create a new dimension for the community especially for young generations.

He said, “I hope this cooperation will benefit the community and the school by transforming the children of the community to become better persons not only academically but also spirituality, and are able to contribute back to the community.”

According to the Headmistress of S.K Gong Tok Nasek, Madam Nor Asikin, the school is delighted to be adopted by IIUM in instilling the importance of sustainable development at all aspects. The school is now focusing in the Sejahtera Garden, a garden with a special breed that can be harvested in a short period of time.

She said, “This Sejahtera Garden is not an ordinary garden in which the result of the harvest will be shared with the community around. The breed will be given to the community so that they can plant it around their house.” ***