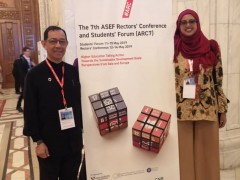 On 11 to 15 May 2019, one of our students attended the 7th ASEF Rectors’ Conference and Students’ Forum (ARC7) co-organized by the Asia-Europe Foundation (ASEF), the  National University of Political Studies and Public Administration (SNSPA), and the Romanian Ministry of Education which took place in Bucharest, Romania.

Nur Syahirah Khanum, a student from Kulliyyah of Languages and Management was selected by the Ministry of Higher Education to be a moderator in one of the sessions held. She played a role as a moderator alongside Mr. Robert Napier from European Students’ Union to facilitate the discussion of 16 students representing Asian and European countries. The discussion is significant to produce a document of policy recommendations which was presented at the 7th ASEM Education Ministers’ Meeting (ASEM ME7).

“As a student, conferences like this is crucial because students learn valuable skills such as negotiations and decision making - especially based on limited resources. This conference too was an avenue where student leaders from all the university of ASEM member countries gather and discuss pertinent issue that they see in their institution and beyond their institution. Therefore, as an avenue for discussion - it is crucial”, she said.

There were only two Malaysian students involved in the conference out of participants from 100 countries which makes IIUM proud to have a representative aside Mr. Kuhan Pillai from UKM - since they need to attend the interview session made by Ministry of Education which comprises group and individual interview.

Tips of the Month - How to Apply Time Off

#WeHearYou, a platform for students to channel their discomfort