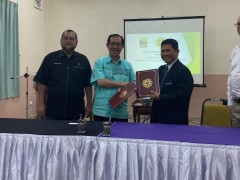 The main aim of the project is to collect tissues and biopsies from endangered species to derive cell lines for future in vitro fertilization (IVF) process.

IMOLEC - led by Dr. Muhammad Lokman Md Isa has worked with Borneo Rhino Alliance (BORA) for three years now and together they have managed to conserved the cell lines for the Sumatran rhinos, which are now extinct in Malaysia.

In this project now, IMOLEC will train postgraduate students in cell culture and tissue collection so that they will serve as staff for BORA.

There will also be exchange of students between IMOLEC and BORA so that we can each learn from each other. There are many animals in line for this project, among them the orangutan, binturong and the Bali cattle.

This is an #IIUM2020 project, among the list of our projects from IIUM that contributes to the society.