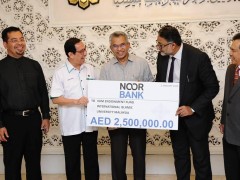 In efforts to support the talent development in the rapidly-expanding Islamic banking and finance industry, Noor Bank – one of the leading Shari’ah compliant banks in the UAE, through the IIUM Institute of Islamic Banking and Finance (IIiBF), has taken an initiative to set up a special sub-endowment under the IIUM Endowment Fund, namely the “Noor Endowment in Islamic Banking and Finance”.

The endowment amounting to the UAE Dirham (AED) 2,500,000.00 shall be from the funds managed by Noor Bank in its fiduciary capacity on behalf of its customers. This will form the basis of cash waqf with the return on the endowment to be utilised for the benefit of the students and staff of the IIiBF.

A fixed proportion of the endowment returns will be re-invested annually to help the endowment grow overtime with a view of increasing the availability of funds for the intended purposes.

In a collaborative spirit, the IIUM Endowment Fund has pledged to award one (1) scholarship to Malaysian student for every three (3) scholarships awarded to the international students.

A maximum of 15 per cent of the return from the endowment will be allocated to “Noor Research & Development (R&D) in Islamic Banking and Finance” to support research, publication and training plans of the IIiBF faculty. Also included in the plan is the creation of a Chair in Islamic banking and finance at the IIiBF in future, to be named “Noor Chair in Islamic Banking and Finance”, to commence only when the endowment has reached sufficient level of returns to afford the cost of maintaining the Chair in a sustainable manner.

The International Islamic University Malaysia and in particular, the IIUM Institute of Islamic Banking and Finance would like to record their utmost appreciation to Noor Bank Dubai for the support and facilitation of this noble initiative.