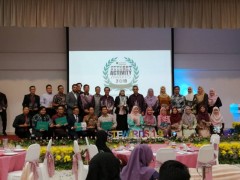 GOMBAK - -  The Student’s Activity Awards 2019 (STEWARD ’19) was celebrated on Friday (8 November) by honouring students involvement in co-curricular activities under 20 categories of awards to recognise their highest commitment and contribution to the university.

This year, Roy Haiza from the Ahmad Ibrahim Kulliyyah of Laws (AIKOL) was chosen as the winner for Society Leader Awards and President’s Award.

Asked to comment on her contribution to societies, she said, “Basically I contested for two major programmes, one is Humanitarian Mission for the Syrian’s refugees at Gazietep, Turki, which we managed to raise almost RM150,000. Besides that, I do weekly programme for Rohingya refugees for educational support whereby I was the president for that organisation.”

She added, “My NGO’s name is Malaysia Still Cares (MSC)”

“I feel honoured, but everything comes with responsibility and of course these awards are not purely my own effort, it also comes from my inspiration, my parents, my lecturers and all my teachers and friends.”

She expressed the hope that after this she could contest at the national level to give her best in representing the university.

She did not expect to win because UNESCO Club is only two years old and very new in IIUM. Hence, she said she felt very happy and grateful at the same time.

Hurairah Chorghay from Kulliyyah of Economic and Management Sciences (KENMS) received the Rector’s Award-Special Recognition for his participation in Maybank Go Ahead Challenge which is an international case competition.

“So basically I won the competition, hence, I guess I got nominated for the Rector’s award. Receiving this award was unexpected and I am surprised with it but I’m feeling happy and grateful, ” he said.

Furthermore, Amirul Hafiz from Ahmad Ibrabim Kuliyyah of Laws (AIKOL) and also from JASA Club was named as the winner for Outstanding Programme Award and Voluntary Leader Award (Community Wellness). 17 people have reverted to Islam from their programme and this is considered as their biggest contribution that they have achieved.

“I feel happy tonight and of course not for myself only but also for JASA Club,” he continued.

In addition, 120 nominations were received in this nail biting competition.

(List of winners obtained from Head of Publication and Promotion, STEWARD)***

Keeping 1m apart should be no hindrance to bonding