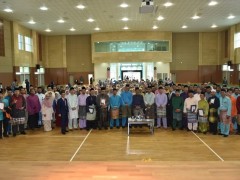 This event came after the end of Ibadah Camp 2019 as its closing. Staff from Administrative and Academic departments participated the event wearing traditional Malay attires.

The objectives of this program is to give due recognition and appreciation to the achievement of all staff in CFS. This event is to honor the staff who has been loyal and contributed mostly to the centre.

The Promising and Loyalty awards are given to academic and administrative who has contributed by serving CFS for 5 years, 10 years, 20 years and 30 years. There are also Best Staff Awards which has been awarded to Sr. Rasidah Jonet (G11 to G22), Br. Shariff Hashim (G29 to G320) and Br. Suhaimi Long (G41 to G52). For the Budi Awards, the recipients are Sr. Noor Amiera Abdul Jalil (G11 to G22), Sr. Rosfariza Mohd. Fadzil (G29 to G32) and Br. Fadzil Jumman (G41 to G52). Special award is given to Br. Abdul Nasir Amat from ODDAIL (Chemistry Lab).

The Centre would like to congratulate all the award recipients and hope this will be an encouragement to trigger CFS staff to work harder in the future.