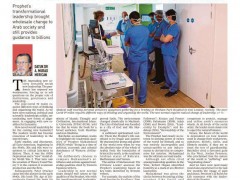 THE NEW STRAITS TIMES | 29 MAY 2020 - The Prophet's leadership qualities

THE impending new society certainly needs new leadership. The pandemic has exposed our weaknesses, forcing us to ask questions on the proper role of institutions, governance and leadership.

The post-Covid 19 realm requires different ways of thinking and organising the world. As we have seen national, political and scientific leaderships collide, necessitating new forms of alignment, in engaging with new realities for humanity.

How novel would leadership be for the coming new humanity? The modern world has become conscious of leadership in the last 60 years.

Early studies, and discourses, all Euro-American, beginning in the 1940s, 50s and 60s were responses to critical junctures in history. Then, it was the 1930s Depression and a "new" world after World War 2. That later saw the creation of Theory X and Theory Y in the context of economic production and the firm.

Subsequently, Peter Drucker came into the picture in the early 1940s. His book The Age of Discontinuity formed the basis for the new public management thinking which came to dominate the theme of leadership and public administration in the 1980s and 90s.

This was later followed by the birth of leadership 'gurus' in the likes of Warren Bennis, Steven Covey and Barry Posner.

Late last year I was introduced to Muhammad: The Ultimate Leader from Western Business Perspectives (2019) by the author. Dr Daud Batchelor, who had a short stint at the International Institute of Islamic Thought and Civilisation, International Islamic University (ISTAC-IIUM), told me that he wrote the book for a broad audience, both Muslims and non-Muslims.

Batchelor, an Australian, wants to highlight the leadership qualities of Prophet Muhammad (PBUH) while "living in a time of political, economic and cultural dominance of Western civilisation".

Leadership in new normal times should well return to the qualities of the Prophet, who with his transformational leadership, brought wholesale change to Arab society, subsequently spreading to remote parts of the world and providing guidance to billions of people and diverse human society until today. The new normal requires radical change of leadership.

Human societies of the past and present inherit similar structures and characteristics. Arab society then was riddled with vices, unethical practices, superstitions and beliefs. The expectation of change in Makkah proved futile. The environment changed drastically in Madinah. The City of Madinah was founded as a city of God and His Messenger.

A sublimed spiritualised society. There the Prophet's life continued to be frugal and austere. He shunned the pomp and glitter of the world even when he was the absolute ruler of the whole of Arabia from the boundaries of Syria in the north, to the southern Arabian states of Bahrain, Hadhramaut and Yemen.

The author of Muhammad: The Ultimate Leader assesses the Prophet's leadership based on key traits identified by Western writers.

For example, the authors of the book Passion for Excellence, Tom Peter and Nancy Austin, believed that "Leadership is a sacrifice — it is self-denial — it is love, it is fearlessness, and it is humility, and it is in the perfectly disciplined will". They never thought that the definition would fit the character of the Prophet like a glove.

The Prophet had clearly no interest in seeking power or riches of the world for himself, and so was entirely incorruptible and unsusceptible to any inducements to deviate him or compromise his mission. Muhammad was the ultimate servant leader.

Although not often cited among leadership qualities in the West, Robert Hogan identified humility as a mark of an effective leadership.

Muhammad was given the choice between becoming a king-prophet (like David and Solomon), or a slave prophet. He chose to be a slave-prophet serving God and humanity.

Clearly new normal futures had been brought by man's recklessness on himself, his notions of society, status and social values, wealth production, technological prowess and excesses on nature. He has disrupted the natural order. The post-Covid times will see nature mitigating itself.

Clearly the Prophet structures trust (amanah) as a sacred covenant. The leader must be competent to protect, manage and utilise earth's resources wisely. At all levels of the social order, the leader must ensure not to upset the natural balance.

Hence, the future of the world is dependent on how leaders need to change their worldviews, mindsets, beliefs, skills, and lifestyle models, if they are to meet the test of guardianship. Batchelor cited a favoured guru in the West, Jordan Peterson, who proclaimed that the nature of the world is "suffering" and "negotiating chaos".

And we have seen (and many would also experience) in the last few months the image of pain and chaos. Peterson's 12 Rules for Life resonates with the leadership of the Prophet.

The new society, with new traditions, must display "authentic leadership", true to themselves, and grounded on moral foundations and spirituality. Muhammad: The Ultimate Leader is a timely reminder in these trying times.

CONGRATULATONS ON WINNING THE ORAL PRESENTATION IN NSEPCOH