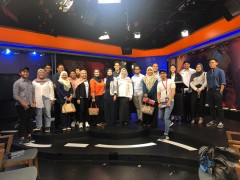 The third Debate of the “Re:Action – Youth Engaged” Public Debate Series was successful

The third session of the “Re:Action – Youth Engaged” Public Debate Series was held on 20th January 2019 at Astro Awani Studio and was broadcasted live over Astro Awani Channel 501 and Astro Web T.V. The motion for the debate was that “ministers who fail to resolve major issue(s) under their purview should resign.” The debate featured, as main speakers, former Chairperson of Bar Council Constitutional Law Committee, Firdaus Husni on the proposition side and Senior Researcher, Centre for Governance and Political Studies, Zaidel Baharuddin on the opposition side. The two youth speakers for proposition and opposition side were respectively, Nur Sarah Hanis Salihan and Daphne Wong Kah Mun both of whom are school debaters. The event’s T.V. host from Astro was none other than our own debate alumni Mr. Ibrahim Sani Asnan.