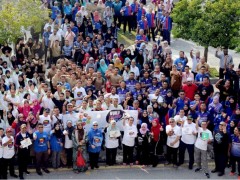 World CleanUp Day 2018 Kicked Off A Day Earlier On Friday

GOMBAK, 16 September 2018: In conjunction with Friday (14 September) being a blessed day, the university launched an early global effort on cleaning up campaign.

Officiated earlier by one day, the World CleanUp Day in IIUM is celebrated annually on 15 September with the objective of instilling the value of keeping a clean environment in campus.

In his speech, IIUM Rector, Prof. Tan Sri Dzulkifli Abdul Razak, urged the IIUM community to maintain a clean environment around the campus, which he said, was in line with the university’s motto of the ‘Garden of Knowledge and Virtue’.

“A beautiful and clean garden will surely give an impact towards our life, especially campus life,” the Rector said highlighting the key factors for producing quality work among staff.

Also present at the event was the President of R-COMM Lestari, Miza Pawan Chik.

Various kullliyyah and departments were divided into groups to conduct gotong-royong activities around their premises, working hand in hand with the students. Almost 400 participants performed their responsibility of driving the effort towards a clean environment. ***