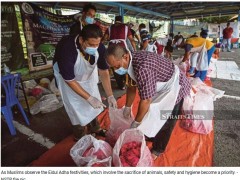 EVER since the coronavirus hit the headlines, the issue of food involving animals has become a subject of discussion, especially wild animals sold in wet markets in some parts of Asia.

It has been noted that some animals are regarded as exotic, if not medicinal, in some cultures.

It is a legacy that is not about to be discarded anytime soon. Despite the unprecedented outbreak of Covid-19, wet markets continue to meet demands from the community atlarge with little change, if any.

Among the concerns are cleanliness and hygiene. Several documentaries showed this in markets, including one in Wuhan, the alleged Chinese epicentre of the initial coronavirus transmission from animals to humans.

Generally, a variety of animals were displayed for sale, from airborne bats to the slithery kind.

Some in cages, others free. All are available with little control of safety and sanitation.

These are now a matter of concern worldwide as possible sources of future outbreaks.

Thus, as Muslims observe the Eidul Adha festivities, which involve the sacrifice of animals, safety and hygiene become a priority.

Although the animals are not wild or exotic as such, the act of slaughtering in large numbers with the participation of even larger numbers of people can be a recipe for disaster.

The threat of another coronavirus causing the fatal Middle East Respiratory Syndrome (MERS), a viral respiratory illness that was new to humans then, comes to mind.

It was first reported in Saudi Arabia in 2012 and has since spread to other countries, including the United States.

Most people infected with Middle East Respiratory Syndrome Coronavirus (MERS-CoV), as it is referred to, developed a severe respiratory illness, including fever, cough and shortness of breath. Some exhibited septic shock and multi-organ failure resulting in death, not unlike Covid-19.

Reportedly, about three or four out of every 10 patients infected with MERS died, with the first-known case traced to Jordan in April 2012, while the largest-known outbreak of MERS outside the Arabian Peninsula occurred in the Republic of Korea in 2015 (similar to Covid-19). It was associated with a traveller returning from the peninsula.

Indeed, cases of MERS had been linked to travel to, or residence in, countries in and near the Arabian Peninsula.

MERS-CoV, too, spread from those who're ill to others through close contact, such as caring for or living with an infected person.

Monitoring of health was also for 14 days, starting from the day someone was last exposed to an infected person.

Healthcare personnel who had close contact with a confirmed case of MERS were also advised to use personal protective equipment.

Travellers were encouraged to practise general hygiene measures, including regular hand-washing before and after touching animals (camels), and avoiding contact with sick animals or persons. The same applied to anyone visiting farms, markets, barns or other places where animals were present.

At a briefing on Feb 17 this year, the World Health Organisation director-general said that more than 80 per cent of patients with Covid-19 have a "mild disease and will recover" and that it is fatal in two per cent of reported cases.

So, regardless of the situation and episode, food selection and hygiene practices are crucial, and should be religiously observed and strictly enforced. Avoid eating animals dubiously sold, or made readily available.

This includes eating at modern outlets where the concept of farm or market-to-table is often removed as one consumes everything extremely fast with little reflection on safety and hygiene.

There is little concern about how the meal arrived on the plates.

Is Malaysia ready for full implementation of virtual learning?