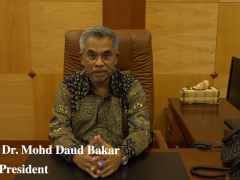 This video is the sixth of a series published by the Kulliyyah of Islamic Revealed Knowledge and Human Sciences (KIRKHS) within its project “KIRKHS Downroad to 2030: Creating Preferable Future".

In this video, Datuk Dr. Mohd Daud Bakar, the IIUM President, provides an inspirational speech calling for creating a futurist mindset among IIUM academics, researchers and students. To this end, there is the need to transform acquired knowledge into practice. With cooperative efforts, wellbeing will be attained for the benefit of the local community and worldwide.