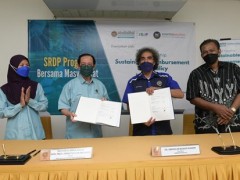 KOMITED Malaysia, also known as DiC Malaysia, was founded in 2001. It is a registered non-profit Community Based Organisation (CBO) that was initiated, led and managed by former drug users. Founded in 1998 and officially registered as a non-governmental organisation (NGO) in 2001 with the intention of addressing the negative impact of drug use and HIV/AIDS in Kuantan, the programmes were expanded to the entire state of Pahang from 2007 onwards in response to the growing need for serious intervention. In 2011, DiC Pahang reached a new milestone when the organisation expanded nationwide and registered as KOMITED Malaysia.

Beginning in 2021, the IIUM-KOMITED Malaysia cooperative programme is overseen by one of the IIUM Flagship 2.0, the Sustainable Reimbursement Drug Policy (SRDP), Kulliyyah of Pharmacy. The SRDP flagship was established in June 2021. Under this flagship, three projects are implemented including:

At present, various programmes have been held with KOMITED Malaysia as part of the flagship project, including a series of workshops, educational talks and community engagement for the staff and clients of KOMITED Malaysia.

This Memorandum of Agreement (MoA) formalised the collaboration between the two parties in carrying out their roles in conducting researches and educational initiatives relating to the treatment and rehabilitation as well as prevention of illicit drug use. This three-year collaboration is intended to have a good influence on the IIUM community and KOMITED Malaysia.

Both parties are hopeful that further mutually benefitting collaborations will occur and they look forward to a strong and fruitful partnership for the greater good of a drug-free future generation.

The following activities have been carried out during this event:

Congratulations on the Promotion to VK7 (Prod. Dr. Muzaffar)