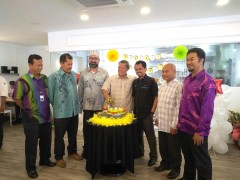 We would like to take this opportunity to thank Tn. Hj. Mohamad Azmi bin Ismail for his leadership and commitment during his tenure as the Director (Administration) at Centre for Foundation Studies, IIUM.  May Allah S.W.T. reward him for all his invaluable services to the Office.

Tn. Hj. Mohamad Azmi bin Ismail joined CFS on 1st December 2014.  After 4 years with CFS, he has been reassigned to the Office of the Campus Director, IIUM Kuantan effective from 2nd July 2018.

We would also like to congratulate Br. Mir Azrul bin Shaharudin on his appointment as the new Covering Director (Administration), Centre for Foundation Studies, IIUM.

Prior to this, Br. Mir Azrul bin Shaharudin was the Special Officer to the President of IIUM since 1st October 2014.