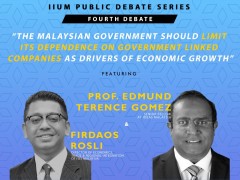 This was the fourth session of the “Re: Action – Youth Engaged” IIUM Public Debate Series. The debate took place at the Main Auditorium and broadcasted on Astro Web T.V. and IIUM web TV live. Astro Awani delay also televised the event on their channel 501 on Sunday, 3rd March, 5:30 p.m. on their Debate Awani slot.

The motion for the debate was that “Malaysian government should limit its dependence on Government Linked Companies (GLCs) as drivers of economic growth.” The debate featured, as main speakers, Director of Economics, Trade and Regional Integration, Institute of Strategic and International Studies, Malaysia, Mr. Firdaos Rosli on the proposition side and Prof. Edmund Terrence Gomez of IDEAS and Faculty of Economics and Administration, UM on the opposition side. The two youth speakers for proposition and opposition side were respectively, Nur Hana Izzati Binti Zawawi and Khalis Khalid both of whom are IIUM debaters. The event’s T.V. host from Astro Awani was none other than our own debate alumni Mr. Ibrahim Sani.

The event was graced By Assoc. Prof. Dr. Zulkifli Hasan, Deputy Rector (Student Development & Community Engagement), IIUM and Noorarizawaty Aris, Chief Assistant Director, Students Development Division, Dept of Higher Education of the Ministry of Education (representing the Director of Students Development Division, MOE). Alhamdulillah, the event was a great success with cooperation and support from Astro Awani. The event is funded by the Ministry of Youth and Sports.