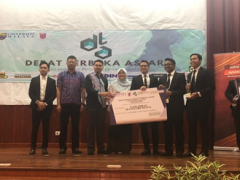 IIUM World Debate and Oratory Centre (IWON) would like to congratulate our Malay Debaters for their achievements at the Pertandingan Debat Terbuka ASTAR 2018/2019 held from 25th – 28th January 2019 at University of Malaya.

IIUM has sent three (3) teams to the tournament (1 senior team & 2 junior teams). IIUM Junior Team A emerged as the 1st Runner-up of the Junior Category while IIUM Junior Team B reached the semi-final of the competition. The details of the students are as follow: We would also like to
congratulate the team from CFS A for breaking third rank after 6
preliminary rounds and proceeded to the quarter-finals. The team
consisted of the following students:

Br. Muhammad Ilham Hafiz has also emerged as the second overall best speaker of the tournament

Congratulations to the KOP recipients of FRGS 2022